Superman ice palaces. and the singularity of data.

Everyone seems to be putting cool pictures on their blog. This one is from the edge of a glacier near Tierra del Fuego. I think it's in Chile. 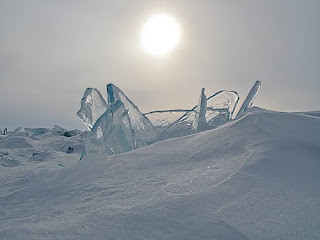 Here's another picture. It's from when I made my first Crystal Superman palace, on Lake Baikal, the biggest (holds the most water) lake in the world. Can you guess what country it's in? 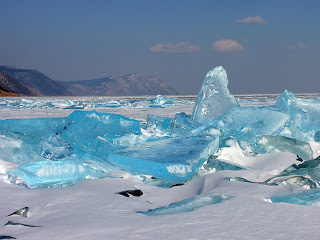 These are some of the broken pieces from my first ice palace. It was destroyed by my arch-nemesis. Aahh the memories of lake Baikal... But that was in the good old days before 'Nam.
Anyway, so I'm writing a goals baselines and methods document for the Speech and Hearing Clinic where I pay money to give therapy to clients who pay money to receive therapy, and I'm reviewing the previous semester report, and I see the phrase "Data were taken..." This is the classic English teacher versus Linguist situation... Should it be "Data is/was" or "Data are/were."
The English teacher (and most SLPs, and most other people) will say the word data is plural, and the word Datum is the singular form. Since "data" is (are:) plural, then data are or were taken is the correct form, and data is or was taken would be worthy of a derisive laugh. Or haughty chuckle.
The hardcore linguist (and me) would say "NO!" The reason for this is only understandable based on a series of facts, which will be presented right now!
1st, language is arbitrary. there's nothing about the written letters B-L-U-E or the spoken word "blue" that is inherently related to the color. English speaking society communally teaches and treats the word as a meaningful symbol. It is the fact that English speakers connect the word to the color/concept that makes the written and spoken blue mean the color. If the English speaking world were to use "Shazam" for blue, then it would mean the color/concept, and would be just as valid. For example "I like the shazam ice in your awesome picture Jeff!"
2nd, all languages change over time. Olde English (Ealde Englisce in Olde English) is very different, and almost entirely unintelligible, for English speakers today. The way they spoke then worked just fine for them. The way we speak now works fine for us.
3rd, there can't be a set in stone rule that says what is correct or incorrect in a language. It is arbitrary, and it changes over time. In some other European languages, there is an official body that makes rules to govern the language. This doesn't work of course, because the language changes over time, and the governing bodies invariably mandate that the 'proper' way to use the language is the way that it was used decades ago.
4th, while there can't be a right and wrong, there can be, and there always is, higher status and lower status dialects. This is unfortunate. It's also unfortunate that the 'correct' rules to follow for the language always are, or quickly become, the rules of the higher status dialects.
5th, the purpose of language is to communicate. The purpose of language should not be to determine or enforce status differences among speakers of different dialects of a language.
6th, since no one can say what is objectively right or wrong, the only way to determine what should be used in a given case, is to use what is the most commonly used and commonly understood form. This will be the best way to successfully communicate with the largest number of people. It will change over time, and that's ok.
Finally, to get back to the data issue. I've found that by googling different forms, I can objectively see which are more common, and therefore which should be used. I googled "Data is" in quotation marks and got 70 million hits. I googled "Data are" in quotes and got 35 million hits.
Clearly, "Data is/was" is more common. The dictionaries say "data" is plural, but it is used as a singular case noun. What it is is what it is. The dictionaries are perpetuating the way it was used decades ago, and aren't accepting its newer and most common form. The dictionaries are WRONG!!!
SLPs are in an unusual neutral area between the English teachers that like to prescribe how language should be used, and Linguists that like to simply describe how language is used. The SLP, while educated in many ways similarly to a linguist, makes a job of moving people with abnormal language or speech skills into the normal language or speech skills category. I think that many SLPs naturally revert to 'English teacher prescriptionism' for the English language too much, and forget the basic theoretical principles that are fundamental to the understanding of all languages.
It is unfortunate that the prescriptionists are so well represented in the educational establishment. I think that many people conform to the old rules to avoid being looked down on by others. As an SLP, it would be hard to have my use of language criticized. But I would rather be criticized than follow empty rules. When my supervisor tells me that I should have written "Data were collected" instead of "Data was collected" in my document, I'm just going to... probably write an angry blog about it and do what she says. Come on, she's the great giver of good grades after all. And I need good grades like an American needs bottled water. :) I spent two minutes thinking of that last phrase. I like it.
Peace out y'all!
Posted by Jeff at 11:38 PM